Version v0.10.0 of SILE has been released and is available for download! See the included CHANGELOG.md or review the commit history for more explicit details.

Most of the many, many improvements in this release are under the hood. The build and test systems have been significantly overhauled, the release process has been streamlined and partially automated, continuous integration now tests code quality and commit messages, and there has been an enormous amount of code refactoring. All of these things make for a more readable code base and a more reliable and maintainable development environment, which we hope will facilitate SILE development in the future. Creating installers should be easier for most platforms than in previous releases, and we hope future releases will come with more pre-built packages.

There are also some user-facing improvements:

This removes the auto-guessing file extension mechanism that allowed *.sil files to be loaded without specifying the full file name with extensions.

A command like sile test will no longer find and build sile.sil, you must run sile test.sil. The mechanism that was doing this was a hack than only worked in some scenarios anyway, and dropping it instead of trying to cover all the edge cases will make it that much easier to use and document. Importantly it avoids edge cases where both *.xml, *.sil, and/or *.lua files all have the same name and the loader really has so idea which one you mean.

Note that packages may still be loaded with no file extension, this does not affect the require() mechanism that looks for *.lua and various other incantations by default.

This release renames and deprecates many internal functions and classes. Most notably the default library used for class models has changed from std to penlight. Old methods are still available for now, but those developing external Lua packages and classes will want to check the wiki for instructions on how to update their code. The next release cycle will start throwing warnings when these deprecated functions are called, and the following cycle will remove them entirely.

Version v0.9.5 of SILE has been released and is available for download! New in in this release:

Most other changes in this release are internal and non-user-visible, including:

After a year of development and many, many fixes, version v0.9.4 of SILE has been released and is available for download! It includes nearly 600 changes, including:

and much more besides.

(Note: This blog post was edited when the proof of concept example was moved from a package in an unreleased branch to this website’s example section.)

The ever-excellent xkcd has produced a table of full-width justification strategies:

Naturally, SILE can support snake-based justification. Check out the code in the “Snake Justification” example on this site. You can see the result in PDF form here, and it looks like this: 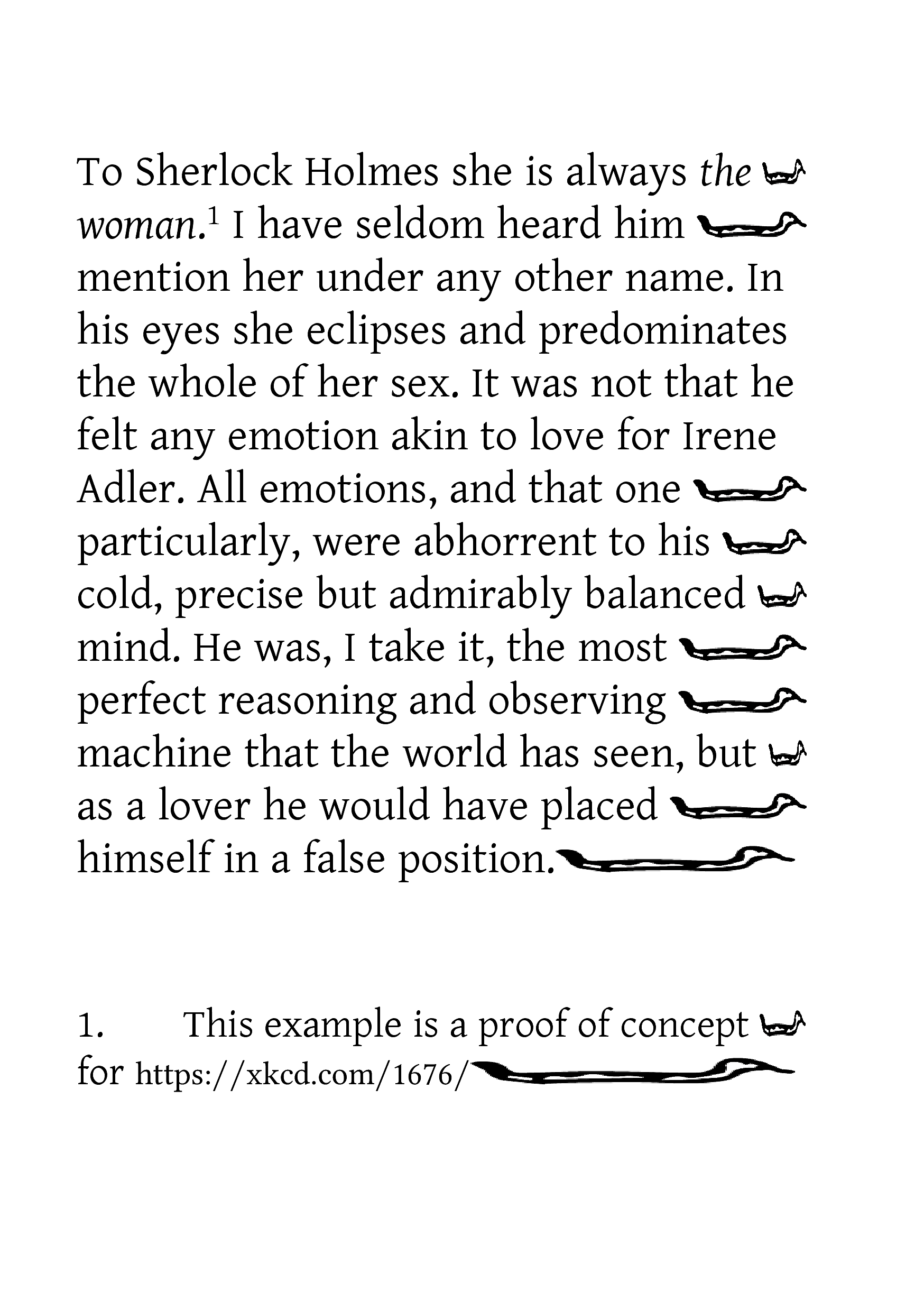 Because SILE is an extremely flexible typesetting engine, this took less than 20 lines of Lua code to implement.

We have been doing lots of other SILE development too, but snakes are fun.

SILE Is Now In Homebrew

For users on OS X, SILE has been added to the homebrew package manager. This means that the easiest way to install SILE is now: